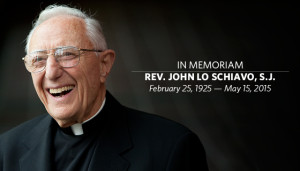 Our community lost a great leader last week. Fr. Lo Schiavo, 90, former president of the University of San Francisco (USF) died peacefully on Friday, May 15, 2015. He has been an influential leader and a mentor to me in my career and in shaping who I am today.

I couldn’t visit USF or the Lone Mountain campus without a quick visit to his office to say hello and see his pervasive smile, share a dream, or just a family update.  If the rules at the time would have allowed, he would have officiated our wedding, some twenty-six years ago.  Most recently, we served on the Board of the American Institute of Ethics together, to encourage more conversations about “ethics in action” in our communities.

Fr. “Lo” is remembered today for strong leadership, his unquestionable commitment to ethical decision making, being a good steward, and his devotion to making USF what it is today and will be tomorrow. He was determined to do what was right for humanity, USF, and our community, even when under tough peer or special interest pressures.

For example, when Fr. Lo decided to halt USF’s basketball program due to improprieties, he was lampooned in the SF Chronicle and amongst alumni athletics benefactors.  I heard a lot of dissatisfaction with his decision.  He believed these were short-term pressures, and prayed that history would agree with his commitment to Jesuit values.  Since, he has inspired many more benefactors, been honored with a building in his name on campus, and greatly expanded USF since his start here in 1977.  From his obituary:

“No issue during Fr. Lo Schiavo’s presidency gained more attention than did his decision to suspend the university’s Division I men’s basketball program in 1982. A former all-city basketball player at St. Ignatius High School, Fr. Lo Schiavo felt he had no alternative but to suspend the program after repeated violations of National Collegiate Athletic Association (NCAA) rules. These violations predated Fr. Lo Schiavo’s administration and extended into his term of office. His decision, premised on ethical principles, was strongly supported by university trustees and executive officers. After the decision was announced, hundreds of letters poured into the university, more than 90 percent in support the president’s action. Editorials were

During this time of sadness and great loss, what an honor to have known Fr. LoSchiavo and have spent quality time with him. He is one of the most influential men in my life.  He has created and anchored a culture at USF that is so strong and grounded that it is no surprise USF has flourished as an organization long after his departure as the President.

He proves that company culture is sacred and, as leaders, it is our job to protect and defend ethics for the success of the organization.  As Peter Drucker says, “company culture eats strategy for breakfast.” Fr. LoSchiavo proved this statement true.  Today, I am grateful to have these values engraved in my heart, taught by his example, and with Fr. Lo’s legacy, a renewed commitment to USF’s mission for us alumni to “Change the World from Here.”

Updates from my organizations